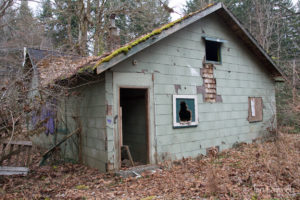 The maternity colony of endangered Townsend’s Big-Eared Bats is one of only three known on Vancouver Island.  It has been roosting every summer for at least 25 years (probably longer) in a derelict house in the Qualicum area of Vancouver Island.

In 2019, the site lost its protected status when its owner (The Land Conservancy of BC) ran into financial trouble and transferred the property to a BC-based mortgage company, in lieu of debts owed by TLC to that company.  In order for the company to recover its funds (that had been loaned to TLC for conservation purposes), it would be necessary for them to sell the property – and in order to do that, it would be necessary to demolish the derelict house and, in so doing, losing the bat rearing habitat and putting the future of the entire colony at risk.

Fortunately, all of the principals and investors involved in the mortgage company are also conservationists, who were very concerned about the ongoing protection of the bat colony.  Rather than just proceeding with the sale of the property, they began discussions with NTLCBC to see if an alternate approach could be found (even if that meant a delay in the recovery of their funds).  We took on the challenge and began working with the Province of British Columbia and others to devise the following strategy.

In early 2018, as the pending transfer of the site from TLC to the mortgage company became apparent, we began working with biologists and staff from the BC Ministry of Environment and Climate Change Strategy, who are responsible for the management of threatened species.  Together, we developed an innovative strategy which, we hoped, would ensure a positive future for the bat colony.  PLEASE NOTE:  this approach is experimental – it had never been tried before, to our knowledge.  As such, there were some inherent risks (see details below).  However, after much consideration and consultation, we believe it was the best option available to us (and the bats), and that it actually had a very good chance of success.

Step 2:  Construct a new “bat house.”  As soon as the property was legally transferred from TLC to the mortgage company (in early 2019), we began working directly on the site.  Specifically, we began construction of a new, purpose built “bat house”.  This new bat house was designed to replicate (as much as possible) the conditions in the attic of the old house (and was copied from a similar “Townsend’s bat house” built previously in the Cranbrook area of BC).  It was also designed to be moveable – built in such a way that it could be relocated to a corner of the site.  This structure was built during the early spring of 2019, with the help of a group of dedicated volunteers from the area. 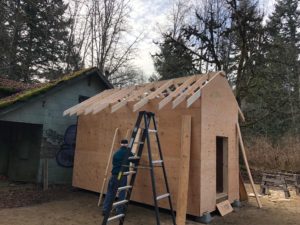 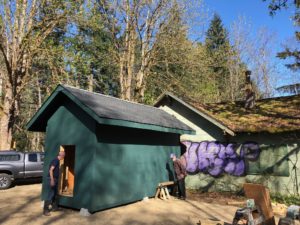 Completed bat house. Note it is on blocks to enable it to be lifted and moved. 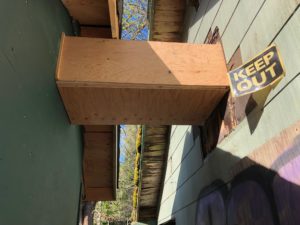 Connection between the new structure and the existing bat house (attic).

Step 3:  Connect the new bat house to the attic of the old house through a short passageway, and allow the bats to move at will between the two structures during the entire 2019 nursing season (approximately May to October).  This connection was completed prior to the bats arriving at the site, and through the summer they increasingly began to use the new structure.  This migration was assisted by “seeding” the new structure with a small amount of bat guano from the old house.  As the bats increasingly used the new structure, their own use continued to seed it even further.

Step 4:  Continue monitoring use of the new bat house, as well as ambient environmental conditions.  A motion-controlled video camera and temperature monitors were installed at the beginning of the 2019 season, providing environmental data as well as visual proof of the bats’ use of the new structure throughout the summer of 2019.

Videos of confirmation of use of the new structure:

Click on the above video of the bats using the new bat house.  Note the bats roosting between the roof joists on the right.  Also note them entering and leaving the structure through the tunnel into the old bat house (attic).

Step 5:  Remove the old house.  Once the colony left the site for the winter (in October of 2019) we began the critical step of demolishing the derelict house.  This was, of course, a nerve-wracking procedure, as there was no turning back from this point.  The bats would now have to adopt the new “house” upon their return in 2020, if they were to continue using the protected site to rear their young, recognizing it from its location and its familiar smell (guano).

Step 6:  Relocate the new bat house.  Once the original bat house had been removed, we carefully lifted the new structure and moved it (about 20 m) to the eastern corner of the property.  At the same time, it was re-oriented so that its opening was facing the same direction, and at the same height, as the original.  Protective fencing was erected around the new facility, ensuring that the bats would not be disturbed upon their return.

Step 7:  Subdividing the property.  Once the new bat house had been established at its new location, the mortgage company (now officially the owner of the site, since March of 2019) subdivided that small corner section of the property from the remainder of the property (using Section 99 (1) (h) of the Land Titles Act).  This created two legal parcels, and the mortgage company then transferred the small bat house parcel to the ownership of NTLCBC for conservation purposes.  (This was done as a gift, and at no cost to NTLCBC).  This also left the remaining parcel  of the original site now free and clear – it no longer contained the protected bat habitat, or the derelict house.  It was cleaned up and put on the market for sale, and in September 2020 the property was sold to a new owner and the mortgage investors were finally able to recover the funds they had loaned approximately 12 years previously. 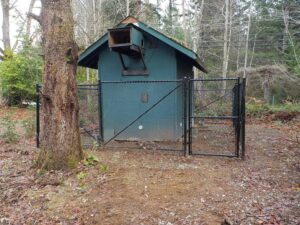 Finished and relocated bat house. Showing the bat “entrance/exit” through the hatch at the front. 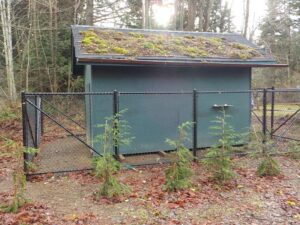 Step 8:  Bats return to new site.  This, of course, was the definitive step.  We waited anxiously through the spring of 2020, monitoring the site regularly to determine if the bats would return to the site and begin using the new “bat house” structure.  We are delighted to be able to announce that in June we did detect that Townsend’s Big-eared bats were indeed using the house as a roosting area.  We continued to monitor the house with video cameras throughout the summer and can confirm that the bats continued to use the site through the whole season.  This is wonderful news and indicates that our strategy for long-term protection of this colony of threatened bats may well be working as we had hoped.  Even better, we can also now confirm that the bats also returned to use the facility during the summer season in 2021, confirming (so far) the success of the the strategy.  While we had some technical difficulties with our video cameras during the 2021 season (so video evidence is not as prevalent), we can say that the amount of bat guano deposited at the site during 2021 was significantly greater (at least 10x) than during the 2020 season, indicating that the bats were using the site both in greater numbers and for a greater duration, giving us strong evidence that the bats were now comfortably adopting their new location.

Step 9:  Longer term monitoring and site protection.  Now that the bats have departed the site at the end of the 2021 season, we will be re-working and reinstalling our monitoring equipment to improve the information we are able to receive.  Also, we’ll be developing longer-term maintenance and care strategies for the site.  We will also be working with our new neighbours in the area, to ensure they are aware of our goals and objectives for the site, and providing an opportunity for them to become involved in this unique bat conservation project.  Stay tuned!

The total cost of this project was about $25,000.  Costs included:  materials and construction costs for the new bat house; demolition and waste removal costs for the derelict house; moving and re-siting costs for the new structure; fencing and site protection costs; site remediation and cleanup costs to enable the sale of the property; monitoring equipment;  subdivision costs, including legal work, survey work and other technical analysis; administrative and travel costs.  Our provincial partners were able to provide about $7,000 to support the project (funds accessed from the Public Conservation Assistance Fund).  The mortgage company investors provided an additional $9,000 (funds contributed from the sale of the property), and NTLCBC and our supporting operating partners, Change Canada Consultants Ltd., provided the remaining $9,000 (mostly as in-kind volunteer labour – including our own work).