All in my back yard… 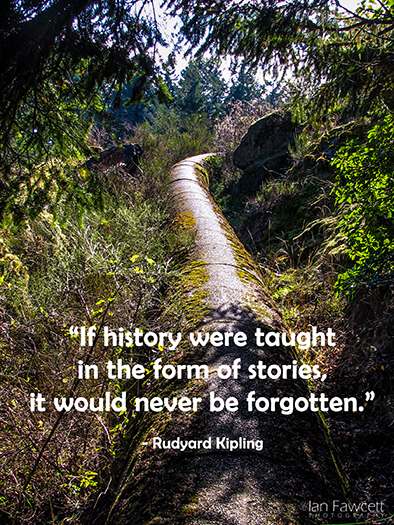 If you take a walk through the woods in behind my house, before long you’ll come across a large concrete pipe winding its way among the trees.  It’s old, covered with a layer of moss in places, but still remarkably intact.  In some places, it lies directly on the forest floor, in others it’s raised on a gravel bed, and in places where it crosses ravines and gullies it rests on pilings and trestles.  When I first “discovered” the pipe, not long after moving into our new home (now, almost twenty years ago), I was intrigued.  What was it?  Where does it come from, and where does it go to?  I followed the pipe, in both directions, as far as I could, until the terrain became impassable, but the pipe just continued on, far off into the distance.

With a diameter of about 3½ feet, in most places the pipe rises above much of the low forest floor vegetation, and it just beckons you to walk along it.  It takes a minute or two to get used to walking along a bit of a curved surface, but then the pathway becomes very enjoyable.  Rather than slogging through underbrush, scratching your legs and tripping on hidden snags, this was like a stroll down the avenue.  Judging from the wear pattern on the concrete and on the way the moss grows, it’s clear that I’m by no means the first along this way – this has been a favourite pathway for many years.

With a little research, it doesn’t take long to find out that this pipe is known as the “flow line”.  It was once the main water pipe, built in the early 1900’s, that brought fresh water to the City of Victoria.  It ran from Sooke Lake, way up in the Sooke Hills, to fill the newly-created Humpback Reservoir that became (and is still) the source of Victoria’s water.  I didn’t know much more detail about the pipe until just recently when some friends gave me a fascinating little book for my birthday – Bringing Water to Victoria, by Charles Tolman, published by the Sooke Museum in 2015.

The book chronicles the efforts to get a good, clean and reliable source of drinking water for Victoria during its early days as a city.  It’s a fascinating story of determination, incompetence, ingenuity and greed, of local champions and outside experts; a story of stops and starts and indecision stretching over decades. (For those of us who live in the Victoria area, it’s all just a bit too reminiscent of modern-day infrastructure projects, like the sewage treatment fiasco and the McKenzie interchange – history, indeed, repeating itself)!

But once the decision to go ahead was finally made, in 1911, it took less than four years to complete the entire project – including determining the route, acquiring the land, building the infrastructure to lay the pipe (including several railways to transport the pipe), building the pipe itself, preparing the intake at Sooke Lake and then building not only the flow line itself, but also the dam and reservoir at Humpback and a further pressurized (steel) pipeline from the dam into Victoria.  A remarkable achievement accomplished by a bunch of remarkable people for the total price of about $2.5 million – and all right in my backyard!

I was never much of a fan of history when I was in school – or, at least, I wasn’t much of a fan of the way it was taught.  It never had much resonance for me, and trying to memorize dates and obscure European locations and interminable border skirmishes was, frankly, tedious and rather boring.  It wasn’t until quite some time later, that I began to perceive history differently.  I began to see it all around me, in the buildings, in the shape of my community, in the remnants of things left behind and the shadows of things that were no longer there.  And the ever-nagging question: “how did this come to be”?

History, for me, became much more fascinating when it came home.  In my view, history is not just dates and obscure locations, not just about great battles, world-shaking events, the comings and goings of kings and queens and presidents.   It’s also about the lives of the people who lived here before, their struggles and triumphs, their thoughts and ideas that nurtured their families, built their communities and shaped their world.  It’s about the stories my grandfather told me, and those from my neighbour.  We all have stories in our lives and they are, in their way, as full of drama and intrigue as any of the great sagas of our history classes.  But it is our stories that shape us, that make us who we are.

Our history – our heritage – is best lived and experienced, understood through the things we can touch and feel, passed on in a way that touches our hearts and our imaginations.  It’s why we need to work hard to conserve and appreciate our heritage, not just the castles and stately mansions, but the miner’s cottages and the old pipes as well.  Those remnants have stories to tell.